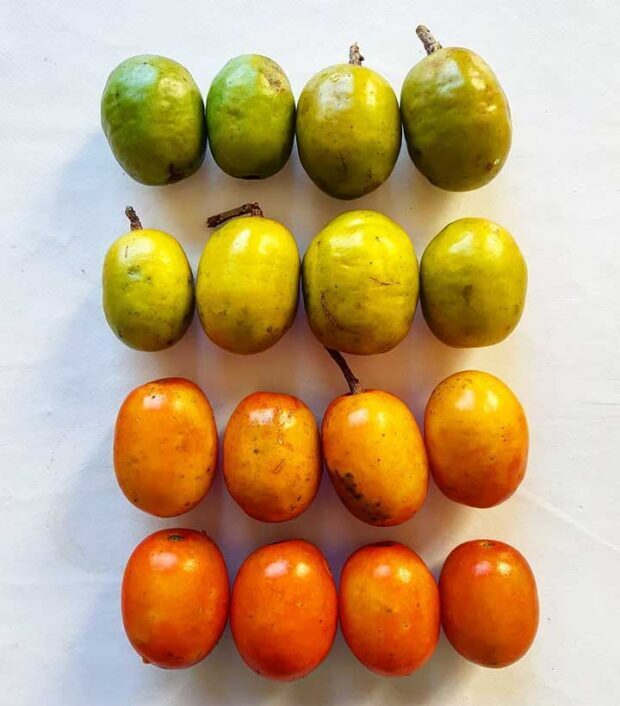 Highlights hide
Nutritional Value
What is Jocote Fruit?
What does it look like?
Health benefits of Jocotes
Jocote is Useful For Medicinal Purposes
Precautions Before Consuming Jocote/ Spanish Plum

It is an interesting plant species in the cashew family, Anacardiaceae. Jocote is native to the tropical regions of America and is also known as Spanish Plum, Spondias Purpurea and Seriguela.

Many Brazilians, particularly those living in the North and Northeast, consume Spanish Plum fruit regularly. Spanish plums are widely cultivated in Brazil’s eastern regions, which explains why they are found in many households.

This fruit is known as jocote in the Brazilian region of Brazil, which is a fruit diverse in quality and abundant in Brazil.

Even so, The United States is also seeing an increase in the popularity of such fruits. To provide you with a better understanding of this fruit, we are ignoring the name ambiguity.

There are a variety of ways to consume seriguela/ jocotes, and it is very healthy. If allowed to fully ripen, jocote fruit is a sweet fruit, with a distinct taste.

What is Jocote Fruit?

Jocote is a fleshy drupe-like fruit having colors between red and orange, with a soft and sour taste coming from its seed deep inside. You can eat it fresh, cook it or make sugar syrup out of it.

This fruit was originally found in tropical Central American regions like Costa Rica, Guatemala, Honduras, El Salvador and Panama, and is from the same family as mangoes.

It was named from the Nahuatl language’s xocotl, which is the scientific classification of the sour fruit in that language.

Its Spanish names are Jocote and Ciruela, but what is Jocote called in English? The most common name for this plum is Spanish Plum, which is also known as the Red Mombin, Purple Mombin, or Red Hog plum.

The Brazilians call it seriguela.

Almost as large as a tomato, these edible fruits are green initially and turn red/ orange when ripe. They are about 4 cm long and have waxy skin.

As the pulp ripens, it becomes yellow with a large seed inside.

Unless it is cross-pollinated, it will not produce fertile seeds.

Fruits like jocote are delicious and healthy. The crop is grown around the world and contains a wide variety of nutrients. Vitamins and minerals are abundant in the fruit. Jocote (Spanish Plum) has several health benefits that can be found below:

1. Jocote acts as an Antispasmodic

Spasm is an unintentional and painful contraction of the muscles. Spanish plums/jocotes are packed with magnesium, potassium, vitamins and calcium, which relieve spasms.

Having a high amount of antioxidants in this fruit can help our cells keep free radicals in check, which otherwise would lead to chronic ailments such as inflammation, cardiovascular disease, and premature aging.

Besides iron, jocotes contain other nutrients important to our body, such as vitamin A and C, enzymes that support digestion and absorption, and iron that sustains our immune system.

Since Spanish Plum consists of a good number of fibers, it will assist in proper bowel function, and will prevent and treat problems like diarrhea, dysentery, and gaseous conditions, thereby helping digestion.

Besides iron, Jocote (Spanish Plum) is also rich in vitamins, minerals, and dietary fiber, which collectively make it an indispensable ally in enhancing the immune system. Even diseases like dengue are treated with it since it is so effective for this purpose.

Since fruits contain large amounts of fiber, it is important for them to encourage a feeling of satiety, thus spacing the time before the body returns to hunger.

Moreover, a 100-gram serving of seriguela contains 0.2-0.6g fiber and just 76 calories, as well as a high concentration of essential vitamins, so it helps delay the appetite and improve digestion and weight loss.

Fruits such as jocote contain large amounts of carbohydrates and iron, which provide energy. Sportsmen should eat Spanish Plum to recover from fatigue and obtain more energy immediately.

Jocote (Spanish Plum) contains a high iron content that is useful in preventing anemia. Pale skin is a symptom of anemia, a disease characterized by a lack of blood.

If left untreated, this disease can be deadly. Furthermore, it stimulates the process of oxygenation, helping to strengthen the whole organism.

9. Helps in proper functioning of the body

It also contains antioxidants that reduce free radical development in the body, preventing diseases and premature aging from occurring.

Several nutrients found in seriguela, including vitamins, potassium, and calcium, help to suppress spasms and involuntary contractions of the muscles caused by a deficiency of such mineral salts.

The seriguela has also been shown to have cicatrizant effects, which is very useful and effective for healing wounds and burns.

Jocote is Useful For Medicinal Purposes

This delicious creamy fruit is primarily used in sweets, desserts, jams, juices, ice cream, and so on, like other fruits.

The leaves and bark of this plant are also useful. Below are a few of its medicinal and other uses:

Disclaimer: “The content in this article is not intended to be a substitute for professional medical advice, diagnosis, or treatment. Always consult your physician before starting a diet, exercise, or supplement regimen. This article is intended for educational purposes only.”