What is Skin Purging? Causes & Treatment | Skin purging vs Breakout

Did you just find out that perfect product for all your skin related issues? Which will also make your skin silky smooth & glowy. But what happened after applying that product to your skin? Your skin started breaking out and you started panicking. Well, this after effect of using a skincare product is called Skin Purging. Don’t worry it didn’t just happen to you.

A lot of women, even men suffer from Skin Purging after using new skin products. Well, it’s not too bad that purging happens to your skin. In fact, in the process, it’s removing all the bad substances/toxins/synthetics from your skin and you can be sure that your skincare product is working.

What Is Skin Purging?

When your skin gets exposed to the ingredients in your skincare product, it reacts with the product and increases the cellular turnover rate leading to excessive cell formation. This means that the new skin cells will make space for themselves and will lead to the shedding of dead skin cells, oils, bacteria, flaky skin, etc. Which in turn causes pimples and breakouts.

It may look like your skin is breaking out but it’s not. There’s a difference between the two, but more on that later..

It doesn’t leave a permanent scar on your skin like acne or skin breakout. It usually appears after a few days of using new skincare products and vanishes very quickly.

End result of this process is fresh, healthy skin cells will appear on the surface giving you smooth, shiny & glowy skin.

Skin Purging looks just like a breakout that you have had before so you can’t differentiate between the two immediately. Skin Purging gives you tiny red/ skin coloured bumps on the skin which are painful to touch along with whiteheads and blackheads in some cases. It may also make your skin oily or flaky but not to worry because purging doesn’t last longer than a breakout.

That being said, everyone and their skin is unique. Purging may show up in some forms and locations on the face for some people and different forms and locations for others. The main point here is that it doesn’t stay for long. If it does, you should immediately consult a dermatologist.

How Long Does Skin Purging Last? 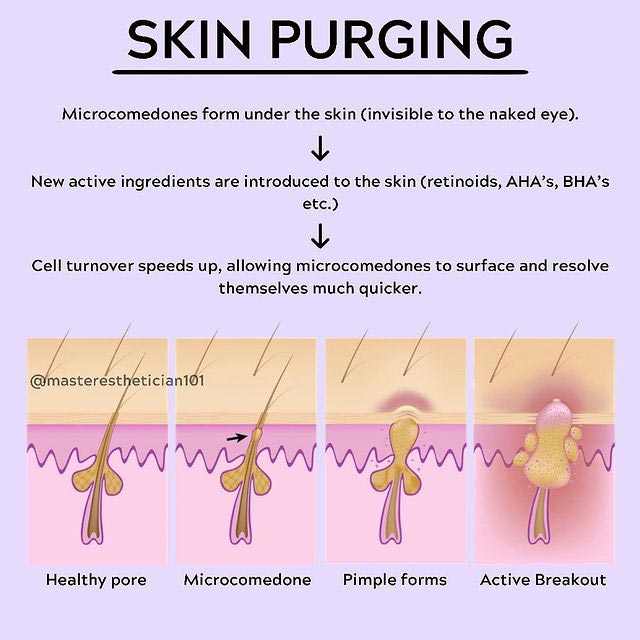 Skin purging may last a week to even a few months. (4 to 6 weeks max. In my experience). The cell turnover pace is faster in young people usually below 30 years of age but as you grow older it gets slower and takes a bit longer. In usual cases, cells get replaced in about 3-4 weeks in the case of young adults.

So, you must wait for at least 4 to 6 weeks before you can see any noticeable benefit of using that new skincare product. Consistency is key here.

How can you tell what actually it is? How to know if that product is actually damaging your skin rather than improving it? As I mentioned earlier, you wouldn’t know immediately if a product is working or not. You need to be consistent and patient to understand if your skin is on its way to improvement. So, You need to let that purging phase pass.  At-home treatment requires four to eight weeks to see improvement – American Academy of Dermatology.

Skin purging takes place when you start using a new skincare product that contains chemical exfoliants such as alpha-hydroxy acids, beta-hydroxy acids, and retinoids, all of which speed up the rate of skin cell turnover (the rate at which your dead skin cells gets shredded and gets replaced fresh new cells), says Dr. Gonzalez.

An interesting fact about skin purging is that in some cases it doesn’t actually cause new pimples, but rather brings up about to be active pimples that were already there underneath the skin to pop up, so it’s just accelerating what was already going to take place. Skin purging especially occurs when you use products intended to clear pimples.

What to do when skin purges

I understand your desperation! You want to see the results quickly for using that new product you just bought but what you find out is that instead of getting clean, clear & glowy skin, it’s getting worse than before.

Some recommendations on how to get through the Skin Purging process:

Don’t use synthetic products including foundations specifically those that contain silicones as an ingredient, harsh moisturizers, face packs, etc. Use only natural & antitoxin products.

You have to be patient while your skin & the product is doing their jobs. Don’t quit on using it just because you’re seeing some small pimples on your face. You may call it a lengthy process but it’s worth the wait. Leave your skin to work through its natural process.

Squeezing the pimples will only make them worse and cause more pimples around that area. So, let it be there for a while. It will go away on its own.

If you feel that it’s not going out of hand and it’s not normal or taking more time than usual, then you should definitely visit a dermatologist.

Apart from waiting out, not messing with pimples, and visiting your dermatologist, what else can you do to deal with skin purging? Well, you can follow basic advice such as not scratching or scrubbing your skin, washing your face multiple times in a day with water, not touching the skin rigorously.

But just don’t stop using the product. Allow your skin to adapt to the new product and favour your skin for the better.